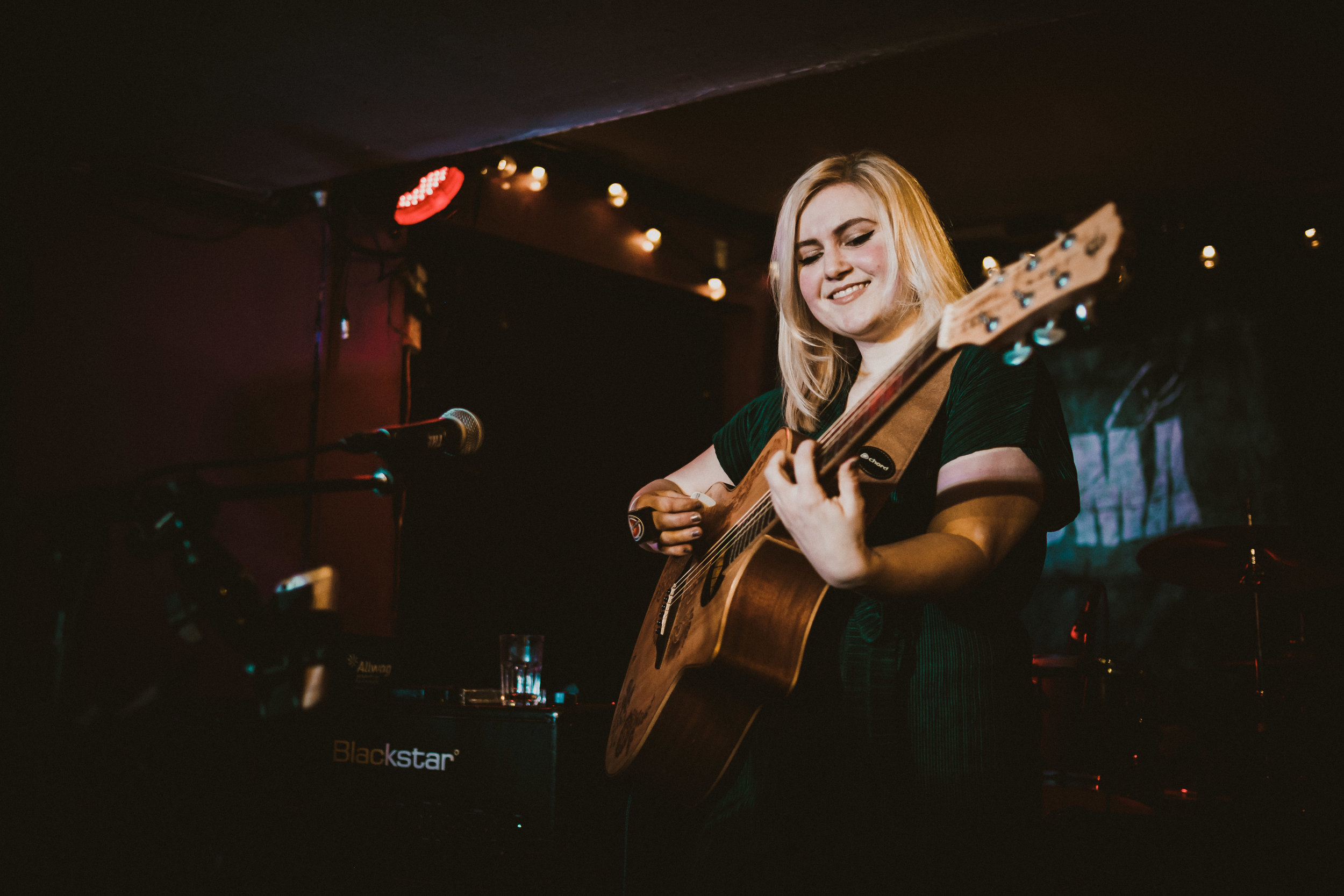 Eleri Angharad is a country/pop artist from Swansea, Wales. Inspired by a North American road trip where she performed in Nashville, Chicago and New York; Eleri writes and performs music that captures the traditional country music storytelling with captivating pop melodies. She draws influences from James Taylor, Kacey Musgraves, Taylor Swift and many more from that road trip. Eleri released a handful of EPs including 2016s ‘All I Can Do’, which included the single ‘Fuel’. An EP which saw her gain airplay on local stations GTFM, Oystermouth Radio and Nation Radio.She also performed at venues across Wales including The Hyst, Clwb Ifor Bach and the sadly departed Gwdihw.

She spent the next two years gigging across Wales and beyond including shows in Ireland and Sweden. Eleri also performed with BBC Radio 2 Folk Award Winner, Blair Dunlop at Llandaff Cathedral, Tedx Swansea and festivals including The Big Cwtch Festival, Home Farm Fest, The Laugharne Weekend, Hub Festivaland more. In 2017, Eleri released her first Welsh language track ‘Dal Fi’ which tells the pure love story between her grandparents, which was released to coincide with Welsh Language Music Day. The track went on to spend 6 weeks on the BBC Radio Cymru A-List, whilst gathering airplay on BBC Radio Wales Introducing and BBC 6 Music with Tom Robinson.

2018 saw her hunker down and write her debut album ‘Earthbound’. Released a year later, Eleri had found her voice; captivated by those Nashville artists’ telling stories of heartbreak, travelling and coming home to tell her own stories. The album was very well received and praised both critically and by her fans. The album’s title track received support from BBC Radio Wales Introducing and was playlisted on the BBC Radio Wales ‘Welsh A-list’ for 5 weeks -her first daytime airplay!The album had further plays on BBC Radio Shropshire Introducing and more. Eleri was made Radio Platfform ‘Artist of the Month’ for February 2019.Furthermore, she received more praise and support from God is on the Zine TV, Welsh Soundboard Magazine, Forever British Country, The AU review and more. Swansea Music Hub called her the ‘Artist of the Week’ to coincide with her album release.

Eleri also sold out her two-album release shows in Cardiff and Swansea and completed a 39-date tour across the UK and 5 mainland European countries. She would add to her accomplishments further by performing at How the Lights Get In Festival and the pinnacle performing on the Greenfield Stage at the 2019 Glastonbury Festival–following legendary punk troubadour Billy Bragg!

2020 was been extremely difficult for independent artists set against the background of a global pandemic but, Eleri Angharad released her single Blank Walls in April 2020. A slight departure from her pure country inspired debut album to include more pop sensibilities. Since its release it has been played over 194,000 times on Spotify alone -her biggest success to date! Backed up with positive critical success from influential new music blog Fresh on the Net, Divine Magazine, Music is my Radar, Gig Soup plus continued praise and support from Forever British Country, Swansea Music Hub and BBC Radio Wales. She also created her own her own weekly live series, ‘Eleri’s Sunday Sessions’,a collaborative project with artists from across the globe to perform and discuss music. Adapting confidently to the ever changing world, Eleri has been invited to perform on livestreams with Swansea Music Hub, BBC Horizons, Wales Arts Review, Country Music in the UK, Modern Age Music Roots, Women I Trust and more.

November 2020 saw Eleri Angharad release New Sin which broke her personal streaming records for 24 hour, weekly and monthly and has so far been listened to over 100,000 times on Spotify. New Sin also saw Eleri get her first play on commercial radio. It left Country Hits Radio, the UKs biggest commercial country station, British new music champion Matt Spracklen speechless and hailed it “A much needed fresh spin on Country Music.”

Eager to help others, buoyed with her 1st in MA Songwriting from the University of South Wales, Eleri joined forces with singer/songwriter Naomi Rae to create Siren Songwriting. A female song writing community based in South Wales designed to create a safe and collaborative space for women. During the initial 2020 ‘Lockdown,’ Eleri also started Mondaay Media, a social media and PR company built on her own success of growing her audience substantially over the past year. She wanted to pass on her knowledge to help other independent artists thrive. Eleri Angharad is a proudly independent songwriter and performer, with the next 12 months continuing to grow her fanbase, audience and sound. 2021 has seen the release of her latest EP ‘Nightclub Floor’ featuring the singles ‘Blank Walls’, ‘New Sin and ‘Delete It’. The title track was even added to the BBC Radio Wales ‘Welsh A List’!

Eleri rounded off 2021 with a fun festive EP ‘A Merry Eleri Christmas’ and is already back in the studio in 2022 working on her sophomore album.