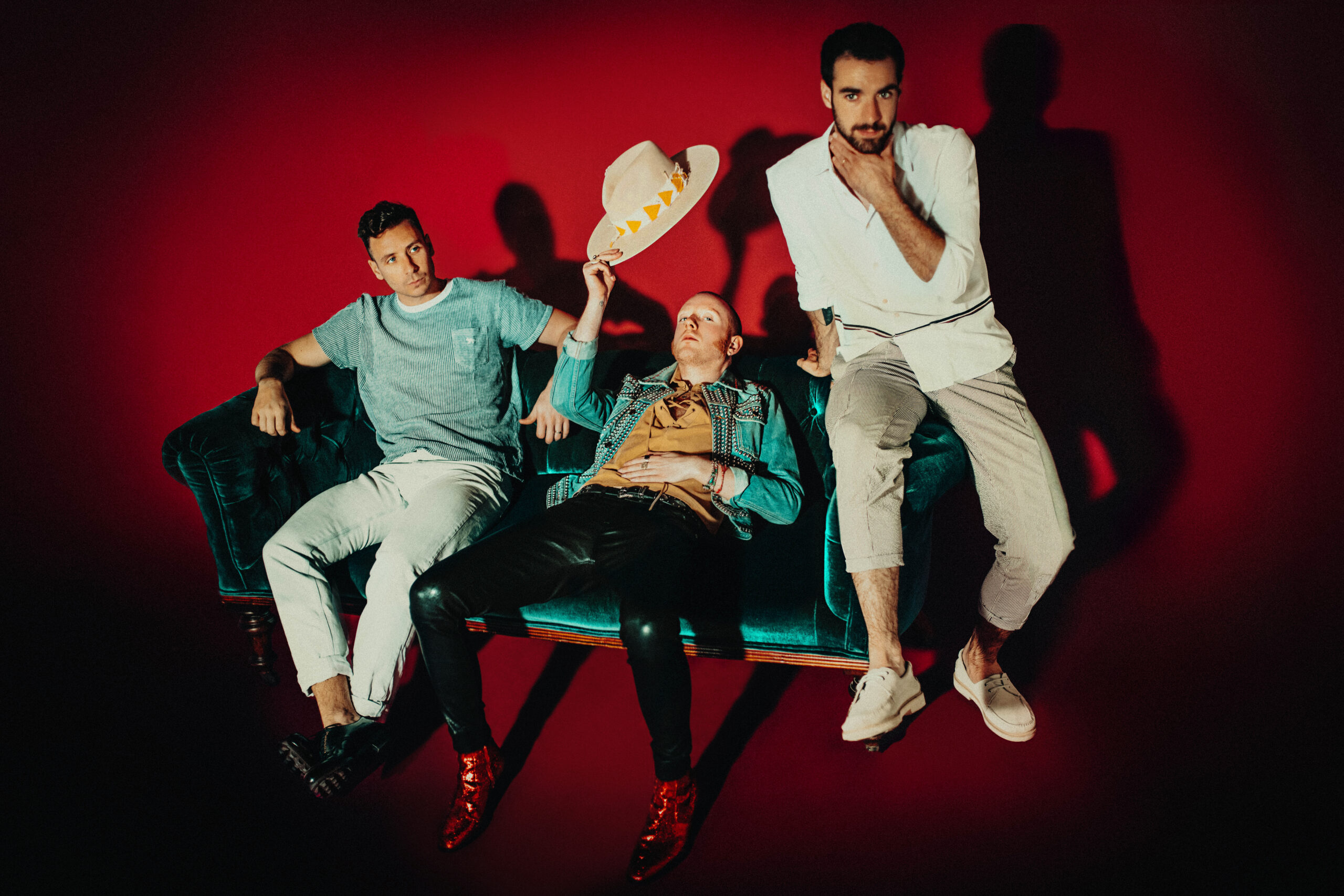 Now showing at Two Door Cinema Club – a story Hollywood could’ve writ. Full of action, intrigue, conflict and resolution, Reservoir Dogs meets Rocky meets A Star Is Born meets Love Actually. The elevator pitch: in 2008, three schoolmates from Bangor Grammar School in County Down – singer Alex Trimble, guitarist Sam Halliday and bassist Kevin Baird – form a band intending to add a pristine melodic frisson to the helium rock sounds of Foals and The Maccabees. Signing to French indie label Kitsune and all but ignored by the media, they build a DIY phenomenon by dint of relentless touring and a close connection to their online fanbase, nicknamed The Basement People.

Within two years they’re playing to festival tents rammed with 30,000 rabid Cinephiles, their debut album ‘Tourist History’ goes platinum on the back of cult singles such as ‘Something Good Can Work’ and ‘What You Know’, and they’re being mobbed in the street everywhere from Mexico to Tokyo to LA. Come 2011 their second album ‘Beacon’ – recorded with Jacknife Lee (U2, REM, Bloc Party) in his LA studio – hits Number Two in the UK and they headline Alexandra Palace and the O2, the ultimate modern-age success story.

So amid the synth gloss of ‘Once’, the pounding disco rock of ‘Dirty Air’ and the Chic funk of ‘So Many People’, you’ll find distorted, subaqueous boudoir soul akin to a sunken Jungle (‘Think’), or a two-minute interlude of multi-dimensional lounge pop called ‘Break’, which sounds like an AI trying to write a Beatles song. “The demo that I brought to Jacknife was a little more frilly,” Alex says, “there’s a lot of lovely chords in there. As soon as I played it to him he said ‘you’re doing it again, this is the McCartney school of song-writing you keep coming back to’. Jacknife stripped it down and built it back up from the beginning. He took all the drums out and put electronic drums in, saying ‘I’m not gonna let you do this as straightforward as you want to do this and I’m not gonna let it be a full song, it’s gonna be about a minute and a half’. It was one of the best things that could’ve happened in the whole process, him saying ‘I’m not gonna let you do what you did before’. It ended up in a really lovely place.”

There’s even an adorable piece of cranky art-pop in the vein of ‘80s Bowie or Talking Heads called ‘Nice To See You’ featuring Zimbabwe’s Mokoomba providing Afro-choir backing vocals and a rap verse by Open Mike Eagle. The Mokoomba connection was an example of sampling coming to life – discovering their music in a break during recording, Alex and Lee decided to sample the band for an ‘80s funk stormer called ‘Satisfaction Guaranteed’, then noticed they were playing in town the following week and invited them to the studio to perform on ‘Nice To See You’ too. “It was phenomenal to see the impact that someone else coming in fresh on a song we’d been working on for a few weeks transformed everything,” says Alex. “We’ve tried bits and pieces of collaboration in the past and it’s never felt quite so natural, but this did, to let someone have a go and attack a song in their own way.”

Thematically, ‘False Alarm’ is a sister-piece to ‘Gameshow’, but by far the cheerier sister. Where ‘Gameshow’ railed against the accelerating dislocations of modern life and the detrimental effect on society of technology and social media, ‘False Alarm’ decides that if you can’t beat it, satirise it. “On the last record but I was really mad at everything, I hated the world,” Alex explains, “but ultimately we’re all part of it and we all do it so it’s a little bit more tongue-in-cheek with this one. A lot of our fans are kids and we have a responsibility to them not as consumers but as people. I don’t want to get angry and say ‘you’re being idiots, come on, this doesn’t make any sense’. You can do that in a way that hopefully will allow people to realise that this is kind of ridiculous. People are realising ‘I can’t keep living for the followers, I can’t keep living for likes’ and that’s a good thing. We’re a very fragile species, we need to realise our own absurdity sometimes.”

So the MGMT-ultra synthpop of ‘Once’ explores the way we define ourselves by likes and our online ‘fame’, and live vicariously through devices. “The phrase ‘once in a lifetime’ came out in conversation and I started questioning what does that mean anymore? When everything is captured on a camera or viewed through a screen, and if you can watch it a million times over, is it once in a lifetime?… There’s also this idea that you are a product, everyone’s building their brand.” “We all have our own value,” says Kevin, “and because someone’s got more followers than you doesn’t make them more valuable than you are.”

‘Nice To Meet You’ expands on that idea, tackling the disconnect between how our old friends present their lives as glamorous Instagram fantasies (and the inadequacies we feel as a result) but can’t bring themselves to expose their fears and failings in person. ‘Satisfaction Guaranteed’, meanwhile, is the result of Alex coming off social media for a while, only to find himself able to see straight through the screen to the code of the algorithm’s matrix when he returned. “I started noticing what was going on a lot more in terms of advertising and what people and products were promising and how they were filtering it in amongst news stories,” he says. “It becomes a part of what you consume on a daily basis, so subconsciously you’re obviously gonna think that this is what I need and it’s gonna make everything better and I might be happier. The main thing that most companies and organisations are selling nowadays is happiness. It’s joy, contentment, as if that should be your natural state. Everything, whether it’s a phone or a sandwich or a car is guaranteeing to make your life better. I wrote ‘Satisfaction Guaranteed’ as this idea of trying to obtain this complete bliss, this idea of heaven that everybody’s trying to sell you.”

They have fun with the future too. If the infectious krautpop of ‘Satellite’ accepts that, as a species, we’re “in it together” – be it Brexit, climate change or any other man-made modern terror – the smog-clogged disco rock of ‘Dirty Air’ even has Alex lustily prowling a ruined city’s dancefloors, posing through the ecological collapse: “The sky is falling, so pull up a chair”. “I thought what if we celebrated the end of the world and just had a big party?” he grins. Later in the album, the internet comes to life and runs off, leaving a psychedelic Dear John letter to the humanity that abused it.

And occasionally Alex flips his screen inward, writing songs to help himself through his songwriting insecurities, or acknowledging the depths and layers of character that the band have been allowed to develop since their involuntary hiatus. It all makes for a wide-eyed, culture-encompassing leap forward for TDCC, a record liable to break, ruin and remould pop in 2019. And it’s only the beginning of the band’s unified and assured new phase. Best strap yourselves in for one hell of a Hollywood ending. A happily-ever-after set to run and run.